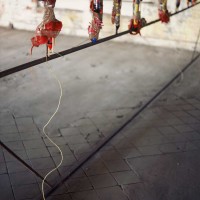 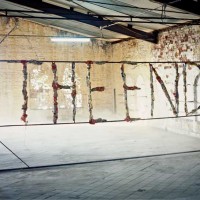 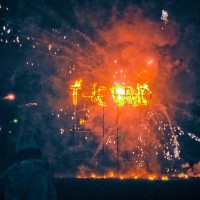 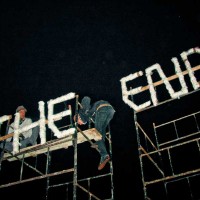 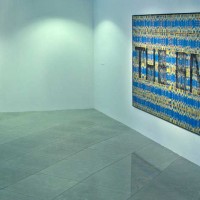 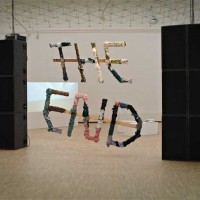 THE END
series of objects and actions
dimensions variable

The End ŌĆö this inscription has appeared in various public spaces, open and closed, and in different circumstances. Made of wood and flammable materials, the slogan has either faced destruction, or at least signalled its (self)destructive potential by emitting loud and realistic sounds of explosion.

XR, a non-profit association that began in 2007, is ready to present ŌĆ£8780hŌĆØ on October 21st. After a year of work, invited artist will show the result of their practice, in a permanent exhibition.
The venue for the experimental exhibition is an early 20th-century German yeast factory in Lubon, Poznan, Poland. ŌĆ£Present,ŌĆØ the main theme of the project, is only the first step of a nomadic experience that will take the practice of ŌĆ£8780hŌĆØ throughout Europe looking for places visibly marked by time. Independently run by a group of 4 young artists and curators, the project appears quite unique: over the year, the invited artists are asked to develop their works following their own rhythm and time, leaving a tangible trace in the architectural environment. The project has become one of the most original events focusing on contemporary art in Poland.
The invited for this first show are:
Althamer Pawe┼é, Ba┼éka Miros┼éaw, Blake John, De Krijger Barney, Hoover Nan (1931-2008), Haino Keiji / Gomi Kehei / Furudate Tetsuo, Jasielski Przemys┼éaw, Karkowski Zbigniew, Koniusz Daniel, Koz┼éowski Jaros┼éaw, Libera Zbigniew, ┼üodyga Marcin, Metwaly Jasmina, Naguib Ali Taha, Prusaczyk Pawe┼é, Semah Joseph, Sevastyanova Yekaterina, Smole┼äski Konrad, Szymankiewicz Ma┼égorzata, Umanets Vladimir.
- FlashArt magazine